From April 3 to 21st, 2012, I was on a lecture tour of Saudi Arabia and Qatar. I was fortunate to have all expenses paid by the sponsoring organization, the Saudi Heritage Preservation Society, which arranged the tour and provided staff to accompany me and my granddaughter/assistant at each venue. We arrived in Riyadh on April 5th, rested for a day and proceeded to Al Jouf. From there, we flew to Jeddah, on the West coast. Flying to each location, we then visited Buraida, in the Qassim region. Next were Dammam, near Dhahran and Alkhobar in the Eastern Province where we used to live. The mountain region of Abha was next, so different from the desert regions. Our final event was in Riyadh, where we spent two days. Granddaughter Yasmine returned home at this point, and I continued to Qatar for a few days, giving a lecture and enjoying some rest.

The events were a mix of tours of women’s societies and the crafts and charitable programs they organized, in addition to lectures to members and community individuals. Other events were Power Point lectures about my research in Bedouin weaving. All events except for the last one in Riyadh were for women only, since Saudi society is generally segregated. The lecture venues were museums, colleges, universities, and meeting rooms at the women’s societies. The final event was held in Riyadh at the historic renovated home of King Abdul Aziz, the founder of the Kingdom, and was attended by Saudis and expatriates, men, women, and the press.

The trip was exciting and exhausting. We were treated with an abundance of hospitality and generosity everywhere. We met people in all walks of life and saw a small sampling of the kinds of projects Bedouin women are making now. We stayed in beautiful hotels and met wonderful people. The photographs will give you a small sample of what we experienced.

I would summarize the trip by saying that there were malls, traffic jams and cars everywhere. Bedouin weaving continues to decline, but interest in their cultural heritage is growing in Saudi Arabia. 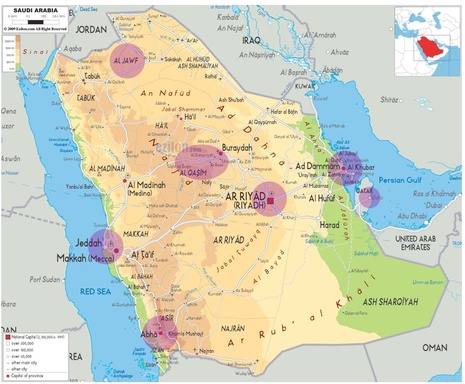